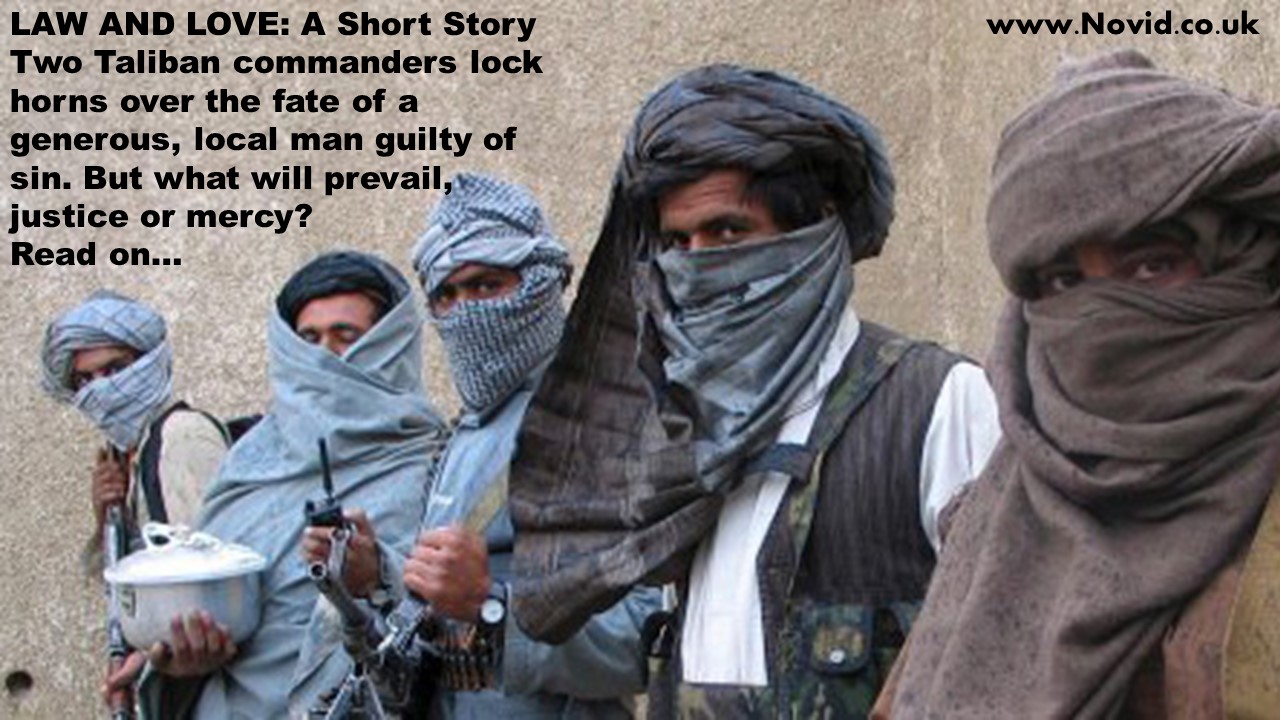 “We have three reliable witnesses,” explained Mullah Ameer, “who are ready to testify that Azmat Khan consumed whisky and consorted with an unknown courtesan during his nephew’s wedding.” And with that, he gazed across the bare room, where Mullah Ghazi sat against the wall, resting against a cushion. The latter looked worried, like his heart was aching.

“So, he will face the judges and he will feel the penalty. This district will see how serious we are; they will see the law of Allah ruling over them.”

After some silence, Mullah Ghazi looked up at Mullah Ameer and sighed. His large, deep eyes swelled with remorse:

Mullah Ameer sat up from his diwan, which he had been resting against, “what are you saying Ghazi Khan?”

“I am saying that the man has repented, his sin is a secret and he is not proud of what he has done.”

Mullah Ameer’s voice hardened, “how can you be so sure?”

“Because he came to see me personally; he shed tears, he knows it was a mistake.”

“So you think this is good enough.”

“Do you think what he has done for us is good enough?”

Mullah Ameer shook with anger: “don’t speak to me like this Ghazi Khan. I know Azmat Khan’s generosity to the poor is without comparison, but why have you become so soft all of a sudden? Even Nabi Mohammad peace be upon him said if his own daughter were to steal then he would be the first to present her hands. The justice of Allah is swift… and it will be better for him to serve his punishment there…Why am I even telling you this? You know all of this yourself.” He stopped and regarded Ghazi Khan, who had stood and listened to him with a mournful look in his eye.

“Ghazi Khan, spit it out. What troubles you?”

Mullah Ameer noticed that tears shimmered and glistened in Ghazi’s eyes. And for the first time for many years, Ameer, who had seen Ghazi fight off a whole troop of occupying soldiers single-handedly, felt like his old friend was suddenly losing his resolution, like a withering flame.

Mullah Ameer laughed out briefly: “You saw a dream…And what did you see?” Incredulity was creeping into his voice.

Ghazi Khan spoke vividly: “I saw Nabi Mohammad, Allah bless him and grant him; I saw him as clearly as the full moon in the clear night sky. His beauty took my breath away. I have not stopped weeping ever since. And there was a look in his eye…It penetrated my core, so much, and that I saw something which makes me cry even more.”

Unimpressed, Ameer responded: “And what was that?”

“I saw my ignorance and I saw the hardness of my heart…” Suddenly Ghazi’s haunted expression transformed into an undeniable intensity:  “My brother, the sharia is the very reason that I breathe, but let me tell you clearly, you are wrong to pursue this case. For I have learned that mercy is the fountain from which our Prophet drinks. And you show no mercy by punishing Azmat Khan,” Ghazi stopped momentarily, noticing Ameer’s growing fury clouding over his face, but he was unperturbed: “and it does not stop with Azmat Khan…We have no right to wield the sword of justice unless we have been fully drenched in Mustafa’s bottomless ocean of mercy.”

Ameer could not hold himself back: “Ghazi Khan! Stop your blabbering like a two penny dervish and come back to reality!”

“No, Ameer Khan, you look at what is within you and look into the heart of the Prophet, then evaluate what we really are.”

Suddenly, Ameer unsheathed his bowie knife: “you have become a deviant Ghazi Khan and you must be stopped!”

In a flash, Ghazi Khan unleashed his own razor sharp dagger and cried: “I am for you!”

The two men were suddenly flanked either side, by their men, who rushed in looking concerned, with their revolvers ready.

Ghazi Khan and Ameer Khan glared at each other for a while but then lowered their weapons.

“I only want the law of Allah to reign supreme in our land,” stated Mullah Ameer calmly now, smothering his rage.

“And I only want Allah’s truth and mercy to prevail,” replied Ghazi Khan, unshaken.

And with that, the two groups of men, crowned with pristine, black turbans and flowing salwar kameez, stood perfectly still.